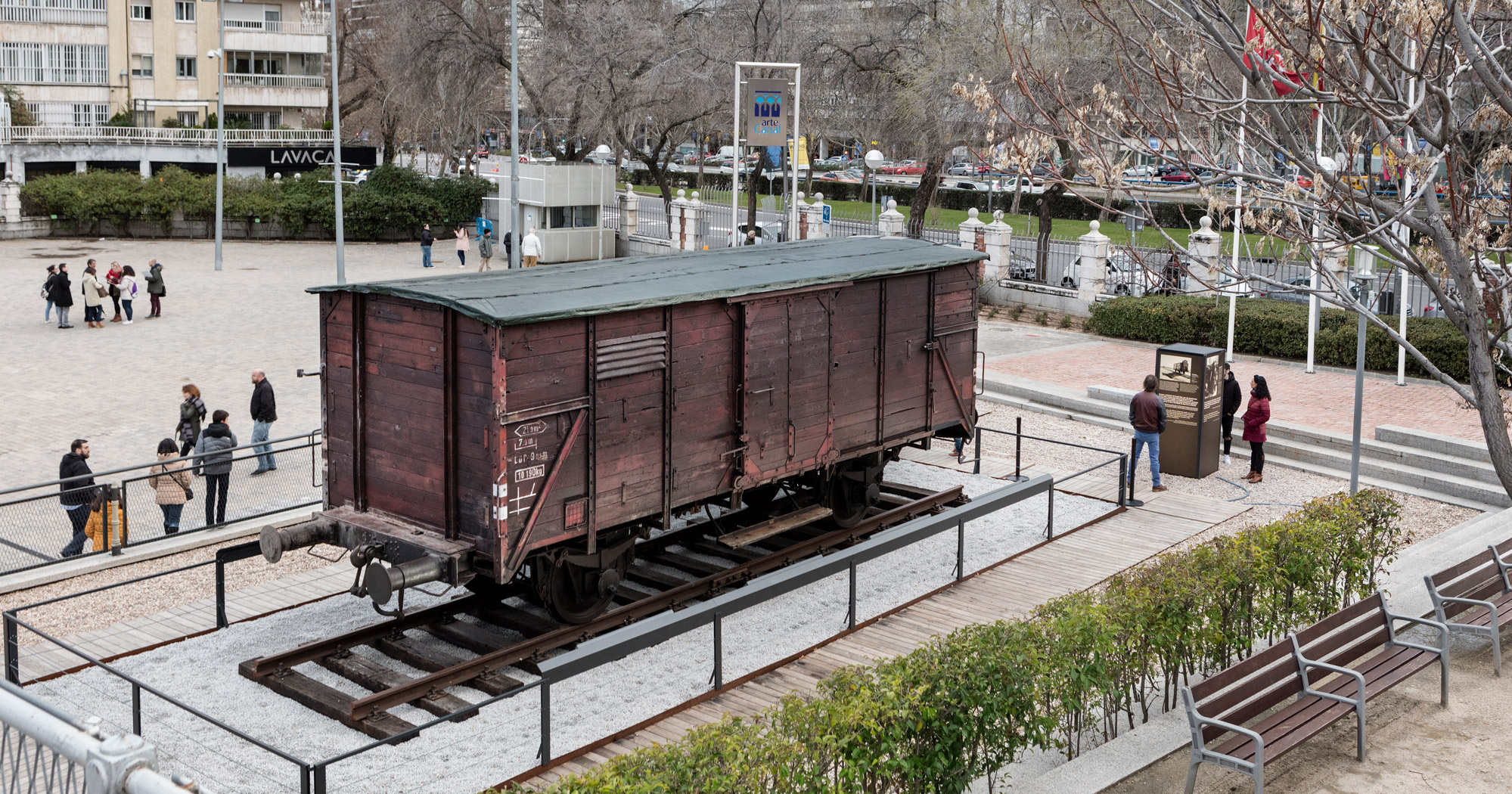 German-Made WWII-era Railway Freight Car Installed at Union Station as part of Auschwitz. Not long ago. Not far away.

German-Made WWII-era Railway Freight Car Installed at Union Station as part of Auschwitz. Not long ago. Not far away.

Kansas City, MO – May 20, 2021 – An authentic German-made Model 2 railway freight car was delivered and installed today in front of Union Station as part of the touring exhibition, Auschwitz. Not long ago. Not far away., presented by Bank of America.

The freight car is one of 120,000 built between 1910 and 1927 by the Deutsche Reichsbahn (German National Railway). Before World War II, the car was used to transport food, goods and livestock. During the war, cars like this were used to transport Jews, Roma and others to ghettos, killing centers and the German Nazi concentration camps across Europe, including Auschwitz. Up to 100 people along with their belongings would be crammed into each car for what was often a several-day journey to a grim reality.

“The freight car speaks directly to the horrifying and systemic plan of mass extermination of persecuted groups including Jews, Poles, Roma and Soviet POW’s,” George Guastello, Union Station president and CEO, said. “And the placement of the car in front of Union Station is especially significant in that countless soldiers departed by rail from here to fight for the liberation of Europe. After the war, Holocaust survivors were welcomed here — as they arrived by train — to start their new lives in Kansas City and beyond. The holocaust is not ancient history but living memory, warning us to be vigilant, haunting us with the admonition ‘Never Again.’ It is a powerful reminder of why we need to remember the tragic past and that freedom and human rights are our collective and sacred responsibility to protect.”

The massive rail car was put on display alongside Union Station’s South Plaza parking lot. Crews spent the morning carefully assembling the tracks the car sits on, after which a 60-ton national boom truck will lift the 24,250 lb car into place. The freight car measures 11.5 ft. wide x 31.5 ft long and occupies approximately 215 square feet of space. Surrounded by a safety barrier and interpretive panels, it will be under 24/7 public and private video surveillance.

“With a current and persistent priority locally, nationally and even globally regarding the transformative power of truth and healing, the timing of Auschwitz. Not long ago. Not far away., is particularly relevant and important,” Ramón Murguía, Union Station Board Chairman, said. “Whether it be in our personal or public lives, at home, in the workplace or the places we gather to create and celebrate, promoting an honest evaluation of history is the first step toward true healing and acceptance. The seeds of hatred were scattered far and wide, methodically and tragically under the Nazi flag leading up to and through World War II. And although evil was met head-on by the allies who ultimately defeated Hitler, some seeds remained. That’s our collective and unfortunate reality and that’s precisely why encounters with unvarnished history – as presented in this monumental exhibition – are essential to ensure that diversity, inclusion and acceptance ultimately win. We recognize that loving each other as humans is the best way forward.”

The historic freight car is the first item to be displayed in public as part of the much-anticipated exhibition. The remaining 700 artifacts have arrived in Kansas City and are awaiting careful placement by a team of curators from around the globe.

Auschwitz. Not long ago. Not far away. will open on June 14, 2021 and explores the dual identity of the Auschwitz camp as a physical location—the largest documented mass murder site in human history— and as a symbol of the borderless manifestation of hatred and human barbarity. The exhibition features more than 700 original artifacts and 400 photographs, many of which have never been publicly available. The story will unfold across Union Station’s 20,000 sqf Bank of America Gallery and introduce objects and survivor testimony through 20 thematic galleries.

Bank of America – the presenting sponsor – continues their tradition of bringing stories and histories of great importance to local, regional and national audiences who visit Union Station Kansas City.

“At one point, my father looked out the window of the cattle car and he read the name of the station: ‘Auschwitz.’ And he didn’t know what it meant; no one did.” Auschwitz survivor Elie Wiesel

“Even death is terrified of Auschwitz.” Auschwitz survivor Ceija Stojka

ABOUT THE AUSCHWITZ-BIRKENAU STATE MUSEUM
Fulfilling the wish of survivors, on July 2, 1947, the Polish parliament created the Auschwitz-Birkenau State Museum on the site of two preserved parts of the former German Nazi camp: Auschwitz I and Auschwitz II-Birkenau. The Memorial today includes an Archive and a Collections department, and undertakes research, conservation, and publishing activities. It is, above all, an education center that teaches visitors about the history of Auschwitz and the Shoah. More than 2 million people visited the Auschwitz-Birkenau State Museum in 2018.

Artifacts and images from dozens of institutions and private collections from around the world will be on view at Union Station.  These sources include: