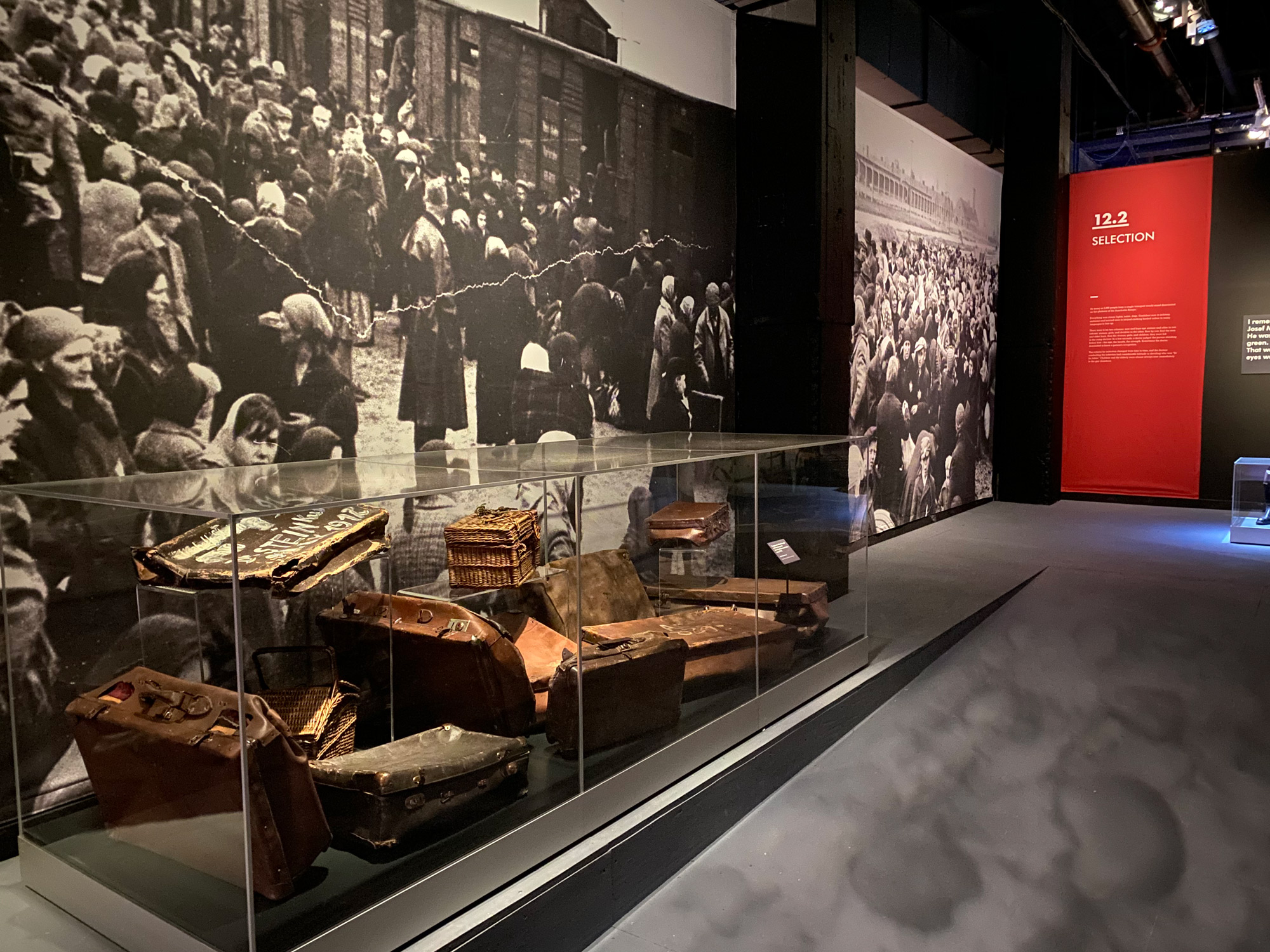 Kansas City, MO – November 12, 2021 – Today, Union Station officials and International delegates from Spain, Poland and Sweden gathered for historic announcements regarding the Auschwitz. Not long ago. Not far away. exhibition and its legacy in Kansas City. The announcements come on the heels of recent news that the exhibition – as forecast – will travel back to Europe (specifically Malmo, Sweden) after leaving Kansas City.

“Today, we gathered a team from around the world to express what we’ve all felt since opening Auschwitz. Not long ago. Not far away. at Union Station this past June,” George Guastello, Union Station president and CEO, said. “That is a sense of profound purpose and satisfaction that the history and messages presented could not be more appropriately timed.  Seeds of hate, intolerance and indifference were spread far and wide as World War II came to a close.  They still exist and it’s up to each of us to notice them and do something to prevent them from growing and spreading.  This is our foundational responsibility and this exhibition puts that duty in sharp focus, and Kansas City has responded in a resounding way.”

Since opening, the exhibition – presented in Kansas City by Bank of America – has been embraced by nearly 260,000 guests who have either visited or secured tickets to visit.  Station officials forecast a total attendance of over 300,000 by the time the tour closes at Union Station.  And that number will mark an all-time record for touring exhibitions at Kansas City’s historic home for the last 20 years.

And in that number, nearly 20,000 middle and high school students have already visited, many thanks to scholarship dollars provided by a group of generous donors.  Over 30,000 students are expected in total.  Again, a fulfillment on Union Station’s education mission.

Also headlining the announcements today was an international delegation that shared an unprecedented extension of the exhibition in Kansas City from the original end-of-January planned closure to now through March, 2022.

“An additional seven weeks is truly a gift to our community,” Jerry Baber, Union Station executive vice president and COO, said.  “We didn’t expect this nor plan for it, but when we started seeing the overwhelming response early in the run, we put in our request.  So many international authorities had to agree to these additional weeks that it really feels like it was meant to be . . . in order to reach as many people locally and across the United States as possible before it must return to Europe.  We are humbled and honored that our request was granted.”

ANOTHER SIGNIFICANT MILESTONE FOR INTERNATIONAL TOUR . . .

Further, the Spain-based Musealia’s CEO, Luis Ferreiro, shared that sometime in December the one millionth visitor to the 3-City/2-Continent tour will pass through Union Station’s historic brass doors to become themselves a part of a remarkable history.

“Many people have asked us, ‘Why Kansas City?’,” Ferreiro, Exhibition Director and Musealia CEO, said. ”Initially, we hoped it would bring guests from around the region, but we have since been amazed by the embrace of the exhibition not only from the community but far beyond. The exhibition has drawn guests from every state and multiple countries. The pace of ticket sales is beyond what we experienced in both Madrid and New York. And this has validated our choice in selecting Union Station as the host of the exhibition. There is something special, honest, and genuine about the Midwest and we’re seeing it and feeling it in a remarkable way as guests visit the exhibition in Kansas City.”

Additionally, a persistent desire by local guests to know more about local Holocaust survivors is being answered with the addition of several precious and priceless artifacts (a scarf and comb) to the exhibition by Sonia Warshawski, herself a survivor of Auschwitz and the subject of the award-winning documentary, “Big Sonia”.

“I am thrilled to display my dear mother’s scarf that I deeply cherish,” Sonia shared.  “It’s important to me to have this opportunity to include it in the exhibit and to share the history of how it survived.”

Finally, Station officials announced how they intend to extend their commitment of Holocaust Education well after the exhibition closes on March 20th.

“This is our highest attended exhibition in Union Station history,” Ramón Murguía, Union Station Board Chairman, said. “When the exhibit leaves Kansas City, it will have impacted hundreds of thousands of lives. But for us, that’s not enough. It’s important to our organization to create an enduring legacy and continue educating our younger generation. Toward that commitment, we will be donating $25,000 to the Auschwitz-Birkenau Memorial Foundation – who will be partnering with the Midwest Center for Holocaust Education – to send Kansas City area high school teachers on a fully-funded trip to Poland, including Warsaw, Krakow and an intensive three-day workshop held at the Auschwitz-Birkenau Museum.  This new educational program will allow teachers to visit Auschwitz in person and bring the lessons of Auschwitz back to our students and communities.”

The recruitment of teachers and the post-trip educational programming will be co-developed with the Auschwitz-Birkenau Memorial Foundations’ local partner: The Midwest Center for Holocaust Education. Details of the program are expected to be announced in January, 2022.  Ahead of that, Foundation officials expressed their thanks to Union Station for their impactful gift.

“We want to thank Union Station for their generous gift to the Auschwitz-Birkenau Memorial Foundation,” Dr. Maria Zalewska, Executive Director, Auschwitz-Birkenau Memorial Foundation, said. “We are thrilled to have their support. Thanks to their donation, we will bring Kansas City metropolitan area high school teachers to Auschwitz-Birkenau and continue working towards our common goal: sharing the lessons of Auschwitz with Midwestern high school students and broader audiences. We want more people to know what Auschwitz was with the ultimate goal of developing an understanding of what leads to genocide.”

Auschwitz. Not long ago. Not far away . – presented at Union Station by Bank of America — is the most comprehensive exhibition about Auschwitz ever to travel internationally. It features more than 700 original artifacts and 400 photographs, many of which have never been publicly available. The story unfolds across Union Station’s 20,000 sq. ft. Bank of America Gallery and introduces objects and survivor testimony through 21 thematic galleries.

The exhibit, originally scheduled to close on January 30, 2022 will now remain open another seven weeks, into March, 2022. It will then travel to Malmo, Sweden where it will be on display.

Auschwitz. Not long ago. Not far away. tickets are available NOW and can be secured at unionstation.org

Advance ticket purchases are necessary for admission.  Walk-up tickets are not available.  Tickets can be purchased online at unionstation.org

Complete details covering security, what to bring (and not), age appropriateness, student fieldtrip scholarships and FAQs are available online at unionstation.org. Visit unionstation.org for additional exhibition information and ticket access.

ABOUT THE AUSCHWITZ-BIRKENAU STATE MUSEUM
Fulfilling the wish of survivors, on July 2, 1947, the Polish parliament created the Auschwitz-Birkenau State Museum on the site of two preserved parts of the former German Nazi camp: Auschwitz I and Auschwitz II-Birkenau. The Memorial today includes an Archive and a Collections department, and undertakes research, conservation, and publishing activities. It is, above all, an education center that teaches visitors about the history of Auschwitz and the Shoah. More than 2 million people visited the Auschwitz-Birkenau State Museum in 2019.

Artifacts and images from dozens of institutions and private collections from around the world are currently on view at Union Station.
These sources include: